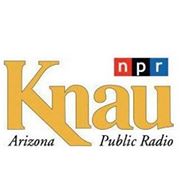 KNAU has been a public service of Northern Arizona University for more than 30 years. Since signing on in 1983, KNAU has expanded to serve the greater northern Arizona region, providing two… read more